The new bombshell of a book is entitled “Bombshell: How the Trump Administration Reached a Tipping Point When the Walls Closed in on the Beginning of the End.”

President Trump could not be reached for comment because he was busy bringing peace to the Middle East.

More satire from Andrew Klavan: Biden Insists On Giving Speech In Cornfield Because He Says The Audience There Is All Ears 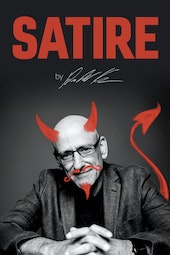 With Ginsburg Gone, Democrats Say They Must Destroy The Country In Order To Save It [Satire]