As part of an ongoing campaign to pressure Facebook into censoring content that threatens their control of the flow of information, left-leaning media outlets have repeatedly sounded the alarm over conservative sites and voices supposedly having a “massive advantage” on Facebook. The self-serving claim reverberates throughout the media echo chamber despite clear evidence to the contrary. That evidence reveals the opposite is true: Left-leaning outlets enjoy more total engagements collectively, dwarf conservative sites in followers and dominate newsfeeds.

The metric left-wing journalists repeatedly point to as supposed proof that conservatives have some sort of unfair advantage on Facebook — a company which has a “largely liberal workforce,” as Politico admits — is engagements (comments, shares, and likes). Journalists like New York Times tech columnist Kevin Roose regularly highlight the daily list of the 10 most engaged stories, which often feature conservative voices taking many of the spots. NewsWhip’s recent reports on engagements on the platform have added fuel to the conspiratorial fire. However, a closer look at the numbers reveals that the establishment media is cherrypicking data to present a false story about supposed conservative “domination” on the platform.

In its September report on Facebook engagements, NewsWhip announced that The Daily Wire had, for the third month in a row, taken the top spot for total engagements, earning 78 million engagements over the course of the month. Fox News came in second with 72 million, the Daily Mail third with 64 million, CNN fourth with 51 million, and NBC News fifth with 45 million.

So, The Daily Wire topped the other publishers on Facebook in September in engagements — this proves the leftist media’s point, right? Not at all, as some simple math quickly demonstrates. Here’s the full list of the top 25 publishers for September: 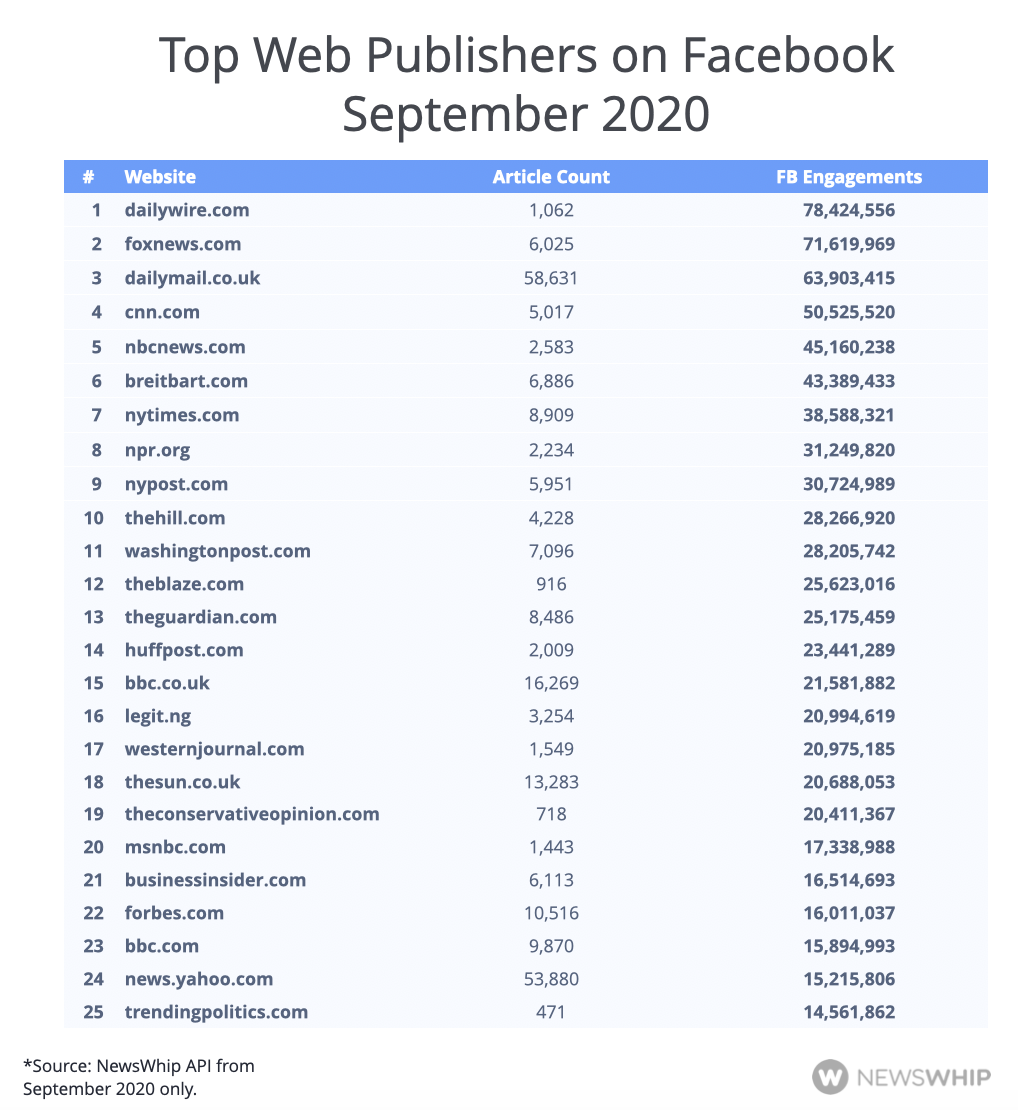 That a few sites, like ours, do quite well in engagement is actually the product of conservative users being funneled to a smaller number of sites because of the overwhelming dominance of left-leaning outlets. Among the top 25 publishers that frequently appear on NewsWhip’s reports, only about a third (36%) are right-leaning.

The left-wing narrative crumbles even further when one considers metrics ultimately more important than engagements. While some conservative sites score high on engagement individually, the full picture reveals that mainstream sites have far more influence collectively.

A comparison of how many “likes” or followers of various outlets and pages have gained on Facebook reveals that left-leaning sites dwarf conservative sites in this metric. The total Facebook followers for the few conservative sites that regularly appear among the top 25 publishers in NewsWhip’s monthly list account for less than a third (31.6%) of the total followers of the sites on the list.

A look at the total number of articles produced by the top 25 publishers reveals just how much left-leaning content overwhelms conservative content. In September, the top left-leaning outlets produced far more content than conservative outlets: more than 142,000 articles versus just over 95,000, respectively.

Left-leaning outlets also dominate in the most crucial metric of all: reach, or how many people see stories by the outlets in their newsfeeds. While the specific numbers aren’t available, Facebook officials have revealed that it is the left-leaning mainstream outlets that regularly have the most reach.

In response to one of Roose’s steady stream of Facebook-themed tweets highlighting the platform’s engagement data in July, Facebook’s head of News Feed John Hegeman suggested that what Roose and others are missing is that even though conservatives do well in the engagement metric, the mainstream outlets enjoy a far broader reach. Business Insider reports (formatting adjusted):

[A]ccording to Hegeman, a more accurate metric for understanding what news people see on Facebook is ‘reach,’ or the number of people who saw a link in their news feed (even if the link was posted by multiple different pages or users). Hegeman shared a list of links that had the widest reach on Facebook, compared with the posts with the highest engagement on the same day. On July 5, the posts with the highest engagement came from Franklin Graham, Ben Shapiro, Breitbart, ForAmerica, and CNN. By contrast, the links with the widest reach that day came from The Los Angeles Times, MSNBC, Ranker, BuzzFeed, and ABC News.

The real story here is that left-leaning mainstream outlets continue to control the lion’s share of news distribution. Their obsession with the success of right-leaning outlets on Facebook in one cherrypicked metric just serves to highlight that reality. What’s really going on here is obvious to anyone paying attention: The mainstream media doesn’t just want to “dominate” the distribution of information, it wants to completely silence conservative voices.

A previous version of this article was published on Sept. 24. It has been updated to include the latest data.

Related: The New York Times Dropped Millions On Facebook To Advertise The 1619 Project…While Trying To Bully Facebook Into Censoring Others