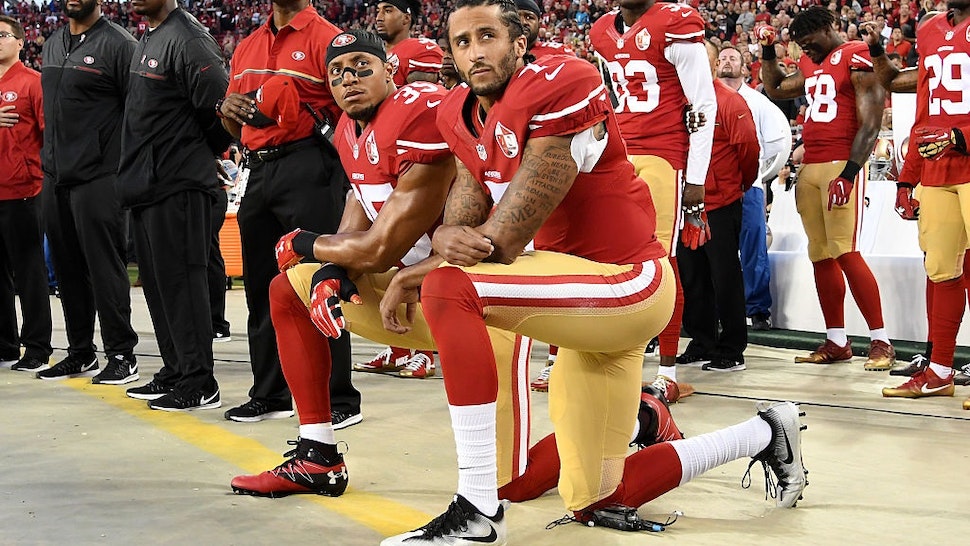 Colin Kaepernick (b. Nov. 3, 1987) is a former NFL quarterback best known for carrying out the politically and racially charged protest of the United States and law enforcement in 2016 during his final season with the San Francisco 49ers.

What was Colin Kaepernick protesting? By refusing to stand for the national anthem, Colin Kaepernick was protesting the United States for “oppress[ing] black people and people of color.” His main focus was law enforcement. “I am not going to stand up to show pride in a flag for a country that oppresses black people and people of color,” Kaepernick said in August 2016. “To me, this is bigger than football and it would be selfish on my part to look the other way. There are bodies in the street and people getting paid leave and getting away with murder.” Upon becoming a free agent following the 2016 season, Kaepernick announced that he would no longer kneel during the anthem.

What are Colin Kaepernick’s political views? Colin Kaepernick is a far-left social justice activist who embraces the Black Lives Matter movement and who believes that the United States is plagued by systemic racism designed to oppress minorities. He has expressed admiration for some radical revolutionary movements and figures, including Malcolm X and Fidel Castro.

How long was Colin Kaepernick’s NFL career? Colin Kaepernick’s NFL career lasted six seasons (2011 – 2016). After serving as backup QB in 2011, Kaepernick reached the pinnacle of his NFL career when he was named the starting QB of the 49ers in 2012 after Alex Smith went down with a concussion. Kaepernick helped lead the team to Super Bowl XLVII (the “Harbaugh Bowl”), but the team lost to the Baltimore Ravens, 34-31. Kaepernick had a successful 2013 season, the 49ers reaching the NFC Championship, which they lost to the Seattle Seahawks. After two sub-par seasons, Kaepernick was demoted to second string QB in 2015. During the 2016 preseason, Kaepernick began his season-long national anthem protest. During that time Kaepernick became the starting QB again due to an injury to the starter. After leading the team to its worst season in decades, Kaepernick chose to become a free agent. Despite orchestrated pressure from activists, he was not signed by any NFL team, coaches and execs citing the distraction he caused and his apparent lack of commitment to the game.