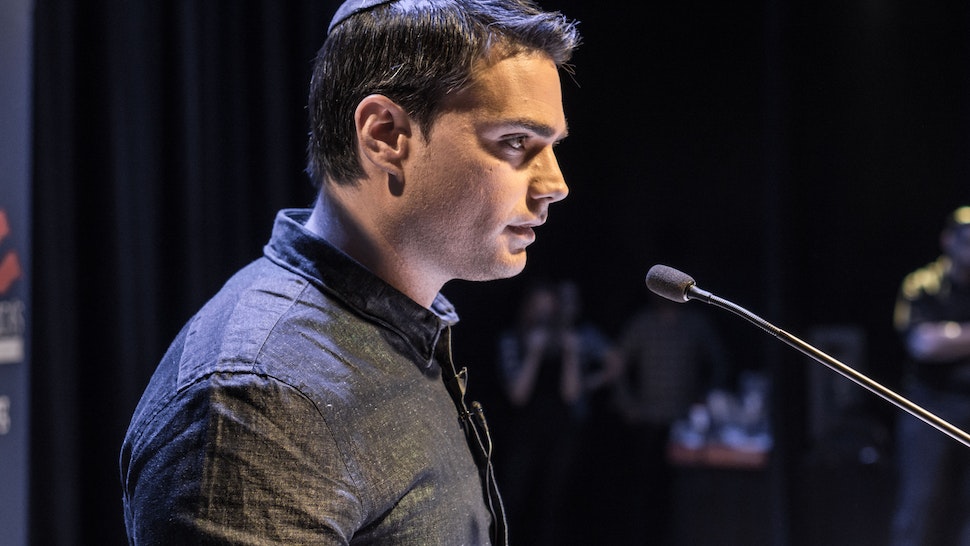 Ben Shapiro is editor-in-chief of The Daily Wire and host of “The Ben Shapiro Show,” the top conservative podcast in the nation. Shapiro is the author of seven nonfiction books, including The New York Times bestseller Bullies: How the Left’s Culture of Fear and Intimidation Silences America (Simon & Schuster, 2012) and national bestsellers Brainwashed: How Universities Indoctrinate America’s Youth (WND Books, May 2004), Porn Generation: How Social Liberalism Is Corrupting Our Future (Regnery, June 2005), and Project President: Bad Hair and Botox on the Road to the White House (Thomas Nelson, 2008). Shapiro was hired by Creators Syndicate at age 17 to become the youngest nationally syndicated columnist in the U.S. He earned a BA in Political Science from UCLA in 2004 and graduated from Harvard Law School in 2007. After working as an attorney for Goodwin Procter LLP, Shapiro began his own legal consulting firm, Benjamin Shapiro Legal Consulting (Los Angeles).

Ben Shapiro’s columns are printed in major newspapers and websites including Townhall, ABCNews, WorldNet Daily, Human Events, FrontPage Mag, Family Security Matters, the Riverside Press-Enterprise and the Conservative Chronicle. His columns have also appeared in the Christian Science Monitor, Chicago Sun-Times, Orlando Sentinel, Honolulu Star-Advertiser, RealClearPolitics.com, Arizona Republic, and Claremont Review of Books, among others. He has been the subject of articles in the Wall Street Journal, the New York Times, Associated Press, and Christian Science Monitor, and quoted on “The Rush Limbaugh Show,” “The Dr. Laura Show,” at CBS News, in the New York Press, in the The Washington Times, and in The American Conservative magazine, among many others. Shapiro has appeared on hundreds of radio and television shows around the nation, including “The O’Reilly Factor” (Fox News), “Fox and Friends” (Fox News), “In the Money” (CNN Financial), “DaySide with Linda Vester” (Fox News), “Scarborough Country” (MSNBC), “The Dennis Miller Show” (CNBC), “Fox News Live” (Fox News Channel), “Glenn Beck Show” (CNN), “Your World with Neil Cavuto” (Fox News) and “700 Club” (Christian Broadcasting Network), “The Laura Ingraham Show,” “The Michael Medved Show,” “The G. Gordon Liddy Show,” “The Rusty Humphries Show,” “The Lars Larson Show” (nationally syndicated), “The Larry Elder Show,” The Hugh Hewitt Show,” “The Dennis Prager Show,” among others.

Since he began writing his first book, Brainwashed: How Universities Indoctrinate America’s Youth (2004), Shapiro has frequently addressed the issue of the Left’s ideological stranglehold on academia and has worked to push back against that trend through fact and logic-based speeches and debates. “Facts don’t care about your feelings,” has become one of Ben Shapiro’s trademark lines. He has appeared as the featured speaker at many conservative events on campuses nationwide, several of those appearances targeted by progressive and “Antifa” activists. Shapiro, an Orthodox Jew, has also worked to expose the anti-Israel and anti-Semitic motivations behind the Boycott, Divestment and Sanctions movement.

What news outlets has Ben Shapiro written for? After serving as editor-at-large of Breitbart (2012) and co-founding the media watchdog site TruthRevolt (2013), Ben Shapiro founded The Daily Wire in 2015. Shapiro has also been a syndicated columnist with Creators Syndicate since age 17.

What are Ben Shapiro’s religious views? Ben Shapiro is an Orthodox Jew.

What books has Ben Shapiro written? Ben Shapiro has written seven nonfiction books, one novel, one memoir, and one collection of short stories.

The Right Side of History: How Reason and Moral Purpose Made the West Great (2019)

The People vs. Barack Obama: The Criminal Case Against The Obama Administration (2014)

Bullies: How the Left’s Culture of Fear and Intimidation Silences America (2012)

Primetime Propaganda: The True Hollywood Story of How the Left Took Over Your TV (2011)

Project President: Bad Hair and Botox on the Road to the White House (2008)