One of the most prominent characteristics of leftists in modern America is their complete inability or unwillingness to apply their principles consistently, especially in their personal lives. Stark illustrations of this problem are provided by the climate alarmist who warns of an impending apocalypse but still maintains a 401k, and the pro-abortion zealot who congratulates a pregnant woman despite believing her to be infested by a subhuman parasite. Of course there are also the well worn examples of the socialist tweeting about the pitfalls of capitalism on his iPhone and the progressive politician preaching about the evils of guns while flanked by a squadron of armed security. It seems that, if not for cognitive dissonance, many on the Left wouldn’t have any cognition at all.

Nowhere is this dynamic more obvious than in the arena of gender. Leftist gender ideology contradicts itself in so many places that you feel yourself nearly going insane just trying to make sense of it all. It is not one coherent theory but a chaotic web of declarations and doctrines, each asserting itself without any apparent awareness of the others.

The Leftist confusion about gender, and about what their own view on the subject is supposed to be, has been especially on display ever since Joe Biden announced Kamala Harris as his pick for Vice President.

There are other funny and hypocritical things about the pick, too, of course, such as the fact that Harris will now be working under the man she tearfully denounced as racist not even a year ago. But the greater point is that the media’s ecstatic reaction to a woman VP pick is belied by the rather serious problem that women don’t technically exist.

If you think I’m overstating the case here, then approach any leftist currently extolling the woman vice presidential nominee and simply ask them what they mean when they say “woman.” They will not be able to answer the question. They cannot define the word. And I mean literally cannot. Their ideology won’t allow it. As leftists, they are obliged to celebrate the achievements of women, but they are also obliged to deny the objective existence of women. This is the paradox that we are expected to pretend we don’t notice. But we should notice it, because it reveals the basic incoherence of leftist gender ideology. 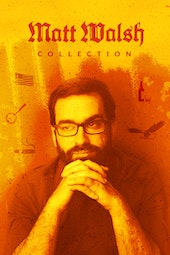 WALSH: National Media Refuse To Cover Murder Of 5-Year-Old Because It Doesn’t Fit Their Racial Narrative