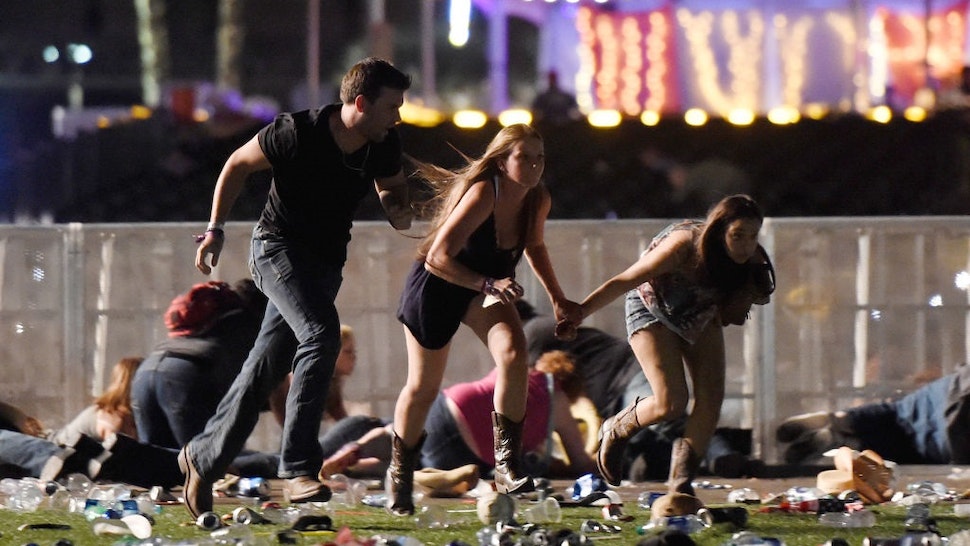 On the night of October 1, 2017, a gunman identified as Stephen Craig Paddock, 64, opened fire on the Route 91 Harvest country music festival in Las Vegas, Nevada, while musician Jason Aldean was performing. Firing from a hotel room on the 32nd floor of the Mandalay Bay Resort and Casino and using multiple rifles, Paddock shot hundreds of rounds for several minutes, resulting in 58 dead and nearly 500 wounded. It was the most deadly mass shooting in modern U.S. history. Paddock took his own life as security personnel and the SWAT team converged on his hotel room.

Paddock had carried 23 guns and thousands of rounds into his hotel room and had fitted twelve of the guns with “bump stocks,” a device which allows semi-automatic weapons to fire more rapidly. Paddock had no prior criminal record and appears to have purchased the weapons legally. In addition to the cache of weapons, Paddock had set up security cameras in the hotel room and the hallway.

Paddock’s motive for the mass shooting remains a mystery. Law enforcement has received hundreds of leads, but so far have not publicly revealed any hard evidence of what drove him to commit the massacre. Paddock’s live-in-girlfriend, Marilou Danley, 62, told the FBI that Paddock had purchased a ticket for a flight for her to her home country, the Philippines, about two weeks before the attack and wired $100,000 to her so she could purchase a home for her and her family. Danley told the FBI that Paddock had exhibited symptoms of possible mental health issues. According to the Las Vegas Review-Journal, Paddock had been prescribed anti-anxiety medication for at least a year prior to the attack; some experts say that a potential adverse reaction to the medication is likely not an explanation for his actions. Paddock’s brother has expressed shock at his actions and says Paddock was neither overly political nor religious, to his knowledge.

FBI: Las Vegas Shooter Had No Motive, Only A Desire For ‘Infamy’