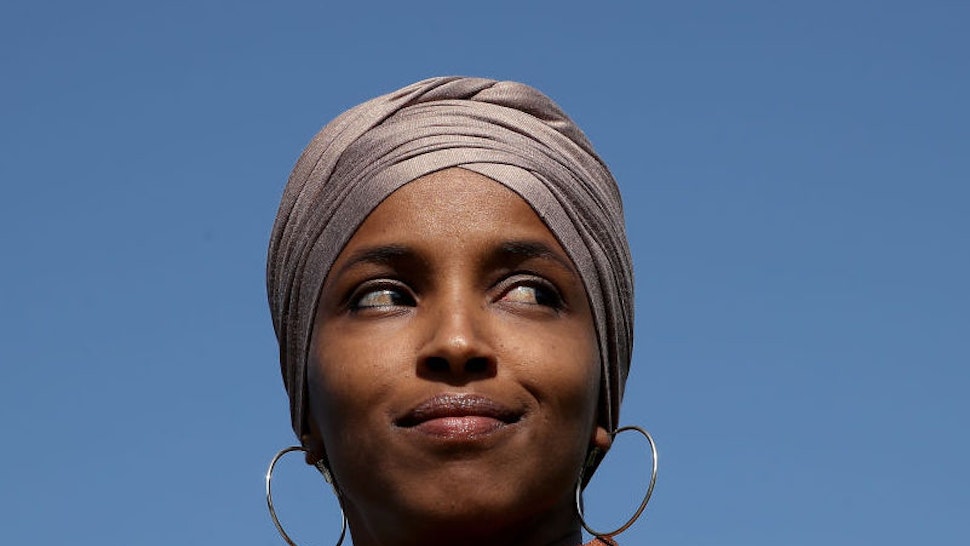 Ilhan Abdullahi Omar is the Somali-born freshman U.S. congresswoman for Minnesota’s 5th Congressional District. Omar, who previously served one term in the Minnesota House of Representatives prior to her ascension to the U.S. Congress, is the first Somali-American to serve in Congress. She is an unapologetic political leftist and a member of the far-left so-called “Squad” along with fellow freshman congresswomen Reps. Alexandria Ocasio-Cortez (D-NY), Rashida Tlaib (D-MI), and Ayanna Pressley (D-MA).

Although Omar is a full-spectrum, across-the-board leftist who almost always takes the most far-left stance on any given policy issue (including health care, the welfare state, student loans, immigration, environmental issues, etc.), she has gained particular infamy for her ceaseless condemnations of Israel, frequent invocations of anti-Semitic tropes and millennia-old anti-Semitic themes, whitewashing of Islamic jihadism, and anti-American sentiments with respect to such sensitive topics as the terrorist attacks of September 11, 2001. In addition to her self-inflicted controversies since joining Congress, Omar has been the subject of close scrutiny with respect to other possible controversies from her past — including whether she married her own brother and/or committed marriage and immigration fraud.

What did Ilhan Omar do before being elected to Congress? Immediately prior to her election to Congress, Omar served as a member of the Minnesota House of Representatives. Prior to that, she served as a community nutrition educator and outreach coordinator, a political campaign manager, and as the director of policy initiatives for the Women Organizing Women Network.

What are Ilhan Omar’s notable policy stances? Omar, along with her fellow “Squad” members Ocasio-Cortez, Tlaib, and Pressley, consistently takes the most far-left stance on any given policy issue. She is a frequent critic of capitalism and describes herself as a democratic socialist. Omar supports mass student loan forgiveness and free college tuition. On health care, Omar supports “Medicare for All,” which would effectively amount to a nationalization of socialized medicine in America. She supports abolishing U.S. Immigration and Customs Enforcement, protecting sanctuary cities, and immediately offering amnesty to millions of illegal aliens presently in the U.S. Omar supports raising the federal minimum wage to $15/hour. On foreign policy, Omar is best known for her adamant opposition to Israel, her support for the Palestinian-Arab cause (seemingly including, at times, for its more militant and jihadist elements), and her support for the anti-Semitic Boycott, Divestment, and Sanctions (BDS) movement to isolate and, ultimately, eradicate the Jewish state.

What are Ilhan Omar’s most notable controversies since being elected to Congress?

Omar Wants To Dismantle Systems That ‘Prioritize Profit.’ Her Campaign Has Funneled $878K To Husband’s Firm.

WATCH: Ilhan Omar Struggles To Answer Who Will Enforce The Law If Police Disbanded

Jeff Sessions Rips Ilhan Omar After Sparring On Twitter: ‘How’s Your Brother, By The Way?’

As Minneapolis Burns, Ilhan Omar Tweets In Part: ‘Our Anger Is Just. Our Anger Is Warranted.’

Ilhan Omar Believes Biden Accuser Tara Reade: ‘Justice Can Be Delayed, But Should Never Be Denied’