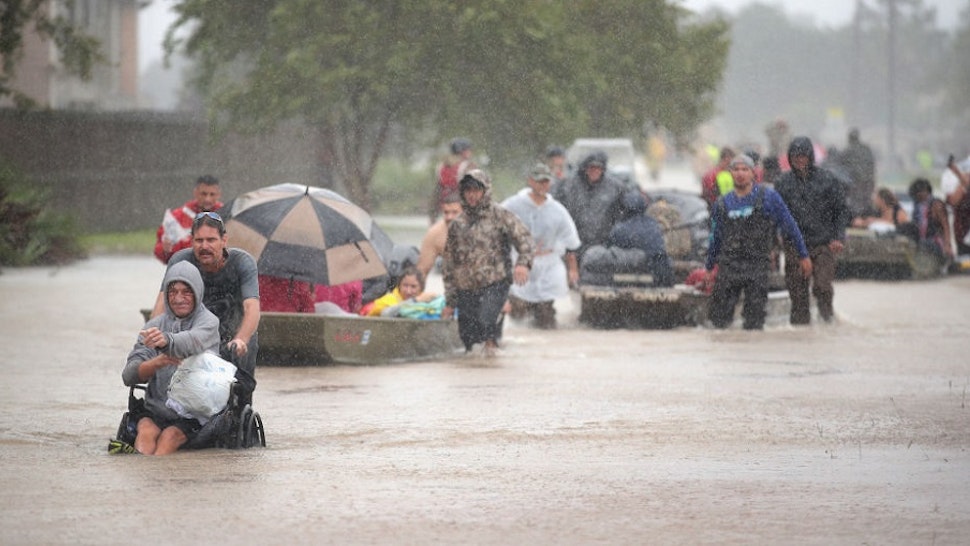 Hurricane Harvey was a hurricane that made landfall near Rockport, Texas (northeast of Corpus Christi) around 9:45 p.m. on August 25, 2017. The storm had a devastating impact on the Houston area, largely due to massive flooding, which resulted in the deaths of over 40 people and the displacement of more than 30,000 residents, over 17,000 of whom had to be rescued by authorities and volunteers.

How much rain did Hurricane Harvey produce? Hurricane Harvey produced over 40 inches of rain in many sections of the Houston area, some places recording nearly 52 inches of water, making it the “wettest tropical cyclone on record in the contiguous United States.” The catastrophic water levels displaced tens of thousands of residents, while the winds and rain left more than 211,000 without power. Estimates of the potential costs of the damage caused by Hurricane Harvey top $100 billion.

DEBUNKED: Hurricanes Harvey And Irma Were NOT Caused By ‘Climate Change’

95-Year-Old War Hero Loses His Home In Hurricane, Then His Granddaughter Steps In

Who Will Rebuild Texas And Florida? HINT: It’s Not Elites And Academics

Poll: Most Americans Approve Of Trump’s Handling Of Hurricane Harvey

Post-Harvey Looting Continues, So Houston Homeowners Are Grabbing Their Guns

James Harden, Move Aside – JJ Watt Is The New Face Of Houston