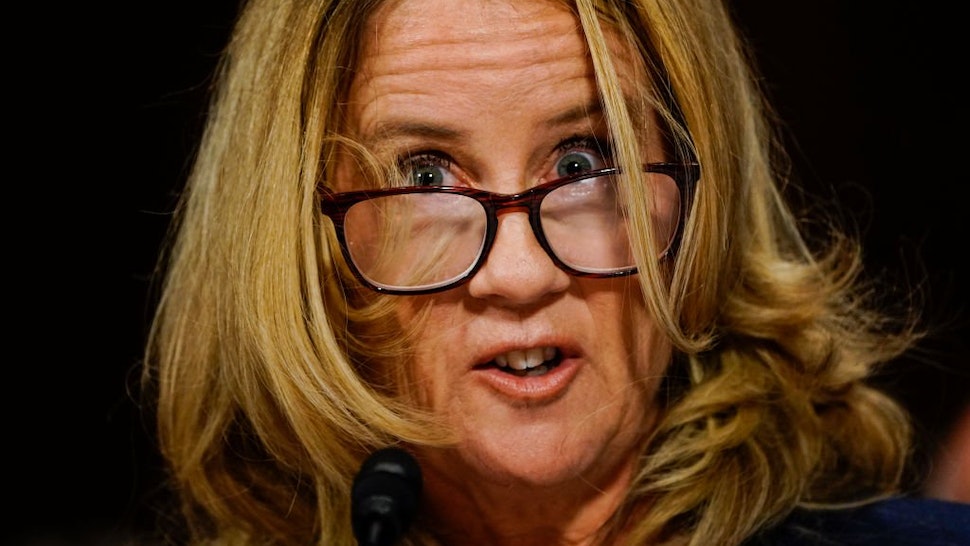 Dr. Christine Margaret Blasey Ford is a psychology professor best known for being the leading accuser of sexual misconduct against now-U.S. Supreme Court Justice Brett Kavanaugh during Kavanaugh’s tumultuous confirmation process in September – October 2018. Ford, who is a professor at Palo Alto University in California, grew up near Kavanaugh in the tony Maryland suburbs outside Washington, D.C. In mid-September 2018, The Washington Post broke a story in which Ford alleged that Kavanaugh attempted to rape her at a drunken high school house party decades prior in Maryland. Subsequent allegations of separate sexual misconduct against Kavanaugh, charged by Deborah Ramirez and Julie Swetnick, ultimately emerged. Ford’s charge was considered to be the most credible, even though Ford was not able (and still has not been able) to produce a single corroborating piece of evidence. Additionally, Ford herself could not remember key details from her alleged story — including when exactly the party in question was and how she got home from the party. Kavanaugh vehemently denied, and continues to deny, all charges of purported wrongdoing.

The U.S. Senate Judiciary Committee ultimately convened a follow-up hearing, in the aftermath of Kavanaugh’s official confirmation hearing, to hear from both Ford and Kavanaugh. At the hearing, Ford presented her story in gripping, emotionally intensive fashion. Democratic senators on the Committee all appeared or outright expressed sympathy and support, while Republican senators on the Committee all outsourced their allotted time for questioning to a specially trained third-party female attorney. Following Ford’s testimony, Kavanaugh’s confirmation appeared to be in serious limbo. But Kavanaugh himself followed and defiantly defended himself, evoking many of the same themes that once led then-Supreme Court nominee Clarence Thomas to accuse the Committee’s Democratic senators of engaging in a “high-tech lynching” against him.

Following the contentious hearing, then-Sen. Jeff Flake (R-AZ) forced the Committee to postpone its planned vote to allow the FBI to more thoroughly investigate Ford’s charges. Ultimately, neither FBI investigators nor the Committee’s own investigators were ever able to corroborate any of Ford’s claims. The Committee voted Kavanaugh out with a favorable recommendation and he was soon confirmed on the U.S. Senate floor by a narrow 50 – 48 vote.

How old is Christine Blasey Ford? Ford was born in November 1966.

How does Christine Blasey Ford claim to know Brett Kavanaugh? Both Ford and Kavanaugh grew up in the Bethesda, Maryland area. They were both attendees of prestigious private schools.

What does Christine Blasey Ford do for work? Ford has a Ph.D. in educational psychology and has worked as a biostatistician and as a research psychologist.

What are Christine Blasey Ford’s personal political convictions? Ford is a registered Democrat and one of her own attorneys, Debra Katz, has conceded that Ford’s attempt to sink the Kavanaugh nomination was due, in part, to her pro-abortion policy stance and the fear that Kavanaugh might one day form part of a Supreme Court majority to overturn Roe v. Wade. Ford’s parents are registered Republicans and it is reported that Ford’s father actually personally told Kavanaugh’s father, during the confirmation fiasco, that he was happy to see Kavanaugh confirmed to the Court.

Rashida Tlaib Stormed Out Of SOTU. Here’s What She Said ‘Triggered’ Her.

Christine Blasey Ford’s Dad Supported Kavanaugh After She Made Accusation

‘RISKED IT ALL’: Blasey Ford Honored In ‘Time 100,’ And Kamala Harris Wrote Her Glowing Profile

Remember The Senate Aide Who Doxxed Republicans During The Kavanaugh Hearings? He Just Got A Plea Deal.