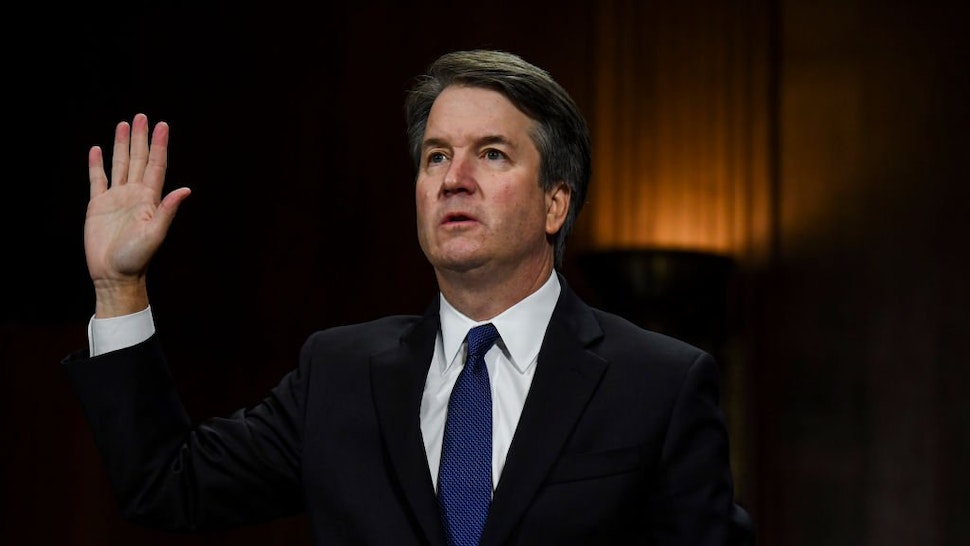 Brett Michael Kavanaugh is an associate justice of the U.S. Supreme Court. Nominated by President Donald Trump in 2018 to replace retiring Justice Anthony Kennedy, Kavanaugh was considered to be one of the more centrist and less ideologically right-wing contenders that Trump had been considering. Following an initially partisan, if non-explosive U.S. Senate Judiciary Committee confirmation hearing, allegations of sexual assault publicly aired from numerous accusers threatened to derail Kavanaugh’s nomination. The Judiciary Committee held a very tense and intensive special hearing that gripped the country, as Kavanaugh directly faced off against lead accuser Christine Blasey Ford. Following a delayed Committee vote to allow for a lengthier FBI investigation, Kavanaugh was subsequently voted out of the Committee and confirmed on the U.S. Senate floor as an associate justice of the Supreme Court by a miniscule 50-48 margin.

Prior to his ascension on the U.S. Supreme Court, Kavanaugh served as a judge on the U.S. Court of Appeals for the D.C. Circuit. He was nominated to the D.C. Circuit after serving as White House staff secretary during the George W. Bush administration. Previously, Kavanaugh served as a partner at Kirkland & Ellis LLP, assisted Ken Starr during his independent counsel inquiry into then-President Bill Clinton’s various wrongdoings. Kavanaugh, who married fellow George W. Bush White House alum Ashley Estes in 2004, has both bachelor and law degrees from Yale University. He clerked on two federal appellate courts and on the U.S. Supreme Court.

Since joining the Supreme Court, Kavanaugh has positioned himself as a right-of-center jurist, although he has notably disagreed at times with his more ideologically conservative colleagues: Clarence Thomas, Neil Gorsuch, and Samuel Alito. Kavanaugh has been most closely aligned with Chief Justice John Roberts, and the two justices have sometimes served as swing votes during Kavanaugh’s brief tenure on the Court.

How old is Brett Kavanaugh? Brett Kavanaugh was born on February 12, 1965 in Washington, D.C. He grew up in the Maryland suburbs outside the nation’s capital.

Who were Brett Kavanaugh’s leading accusers? There were three main accusers during the fiasco that was Brett Kavanaugh’s U.S. Supreme Court confirmation battle. Dr. Christine Blasey Ford, despite any corroboration, claimed that Kavanaugh attempted to rape her during a 1980s drunken high school party in suburban Maryland. Deborah Ramirez, also despite any corroboration, claimed that Kavanaugh forced his penis in her face during a drunken dorm party at Yale in the 1980s. Finally, Michael Avenatti client Julie Swetnick claimed that Kavanaugh participated in gang rapes. Neither the FBI nor the Senate Judiciary Committee’s own investigators were able to confirm any of the accusers’ stories.

What is Brett Kavanaugh’s jurisprudence? Kavanaugh is a right-of-center jurist who emphasizes textualism, strong presidential powers in the realm of national security and foreign affairs, and a denuded administrative state. Nonetheless, he is not considered to be a hardline originalist in the mode of Antonin Scalia or Clarence Thomas.

What does Brett Kavanaugh do in his free time? Kavanaugh is married and has two daughters. Kavanaugh is a big baseball fan and has also coached his daughter’s basketball teams. He is a practicing Catholic who serves as a regular lector at his Washington, D.C. church. Kavanaugh has also run numerous marathons.

Rush Limbaugh: Don’t You Dare Give Democrats A Hearing On SCOTUS Pick, Not After Kavanaugh Fiasco

Lindsey Graham: ‘I Now Have A Different View’ On Confirming Justices After Kavanaugh

WALSH: There Is Way More Evidence Against Biden Than There Ever Was Against Kavanaugh